Spirit Bodies: on the work of Hayley Barker, by Jennifer Remenchik
Link 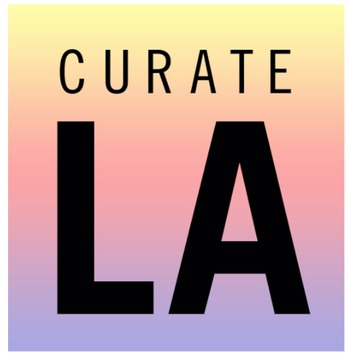 Luckily, she has her own history and it’s one of her favorite topics, too. She offers me a drink of sparkling water which I readily accept as I take a longer look around the room.

What jumps out at me immediately is the singularity of her imagery; every painting and drawing visible contains the image of a face. Emmanuel Levinas once famously said that the face “presents itself, and demands justice,” and it is through this ethical sentiment that we can begin to confront the work of artist Hayley Barker.

In the aftermath of a trauma we often ask ourselves spiritual questions, and yet anyone who has been on a quest for meaning knows there are a lot of detours on the road to enlightenment, many of which involve money scams, half-baked ideas, and just plain disappointment. A painting “Opened my root chakra now what? Volcano” (2017) playfully alludes to this reality without coming across as disrespectful. Another drawing “i opened my eyes and chose not to see” (2017) sounds more serious in its ramifications. Did the “i” mentioned choose not to see because she’s found a deeper reality or truth, or would she simply rather remain in denial?

Barker describes her work as depicting “spirits and guides, goddesses and sometimes versions of myself, disembodied,” and the characters in her work do in fact feel bodiless. Built up of small, fragments of color that draw heavily on the legacy of pointillism, her spirits seem almost-invisible, caught in a space between arrival and exit. We end our evening that night with a promise of studio visit reciprocation, and in the morning I awake to a notification that barker_hayley mentioned me in a comment.

Barker has posted an image of a new “bed drawing,” an ongoing series of artworks she makes very early in the morning. The series depict a range of emotions, many of them veering towards angry, and contain the immediate simplicity of raw, honest communication. The comment beneath the image reads, “inspired by our talk last night @jennifer_remenchik,” and the title encapsulates our conversation in a question: “how can we show our traumas, how do we?” 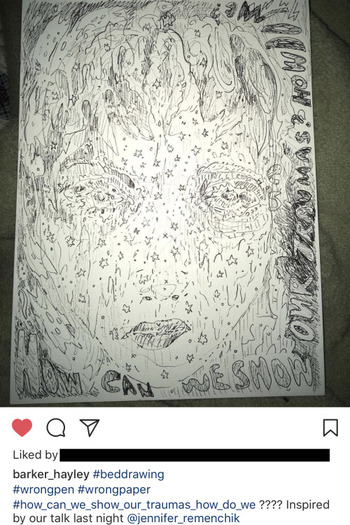